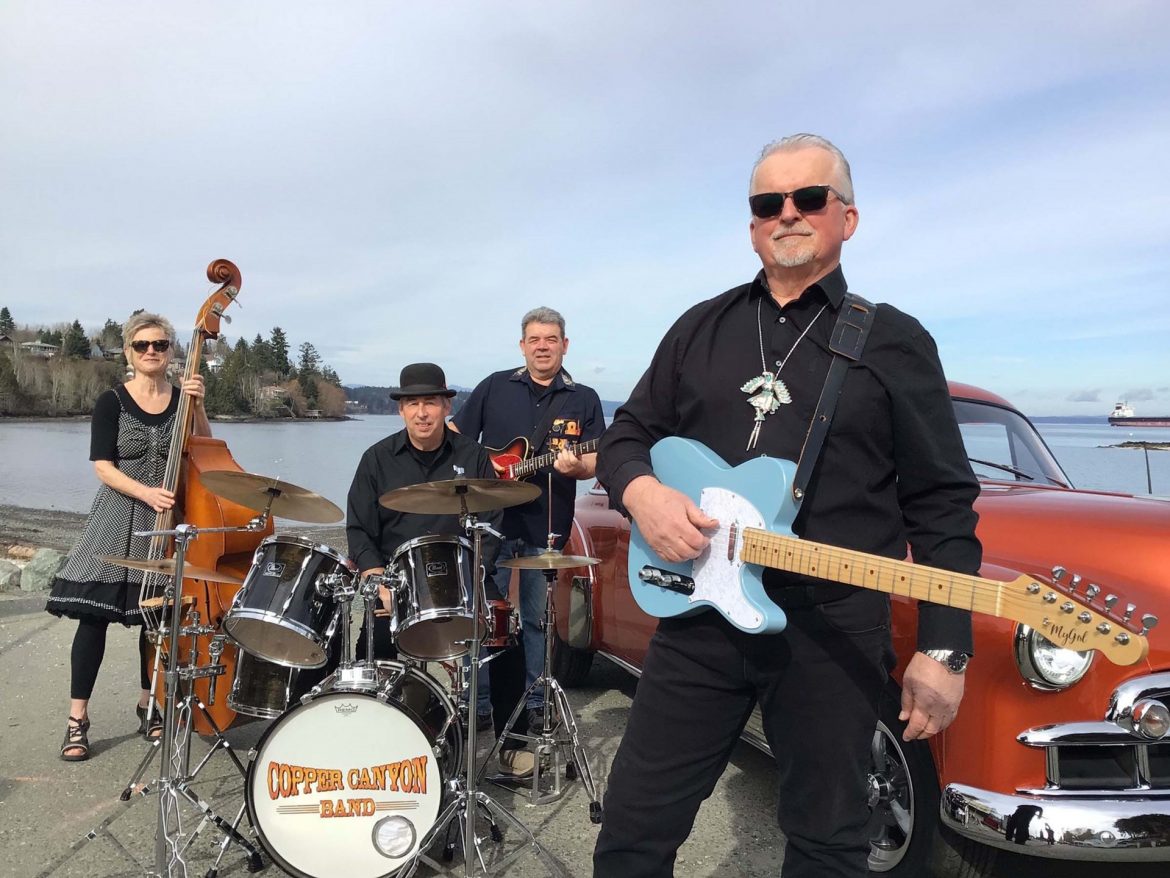 Sit back, relax while enjoying live music with a refreshing beverage in your hand and close friends by your side. One free drink with ADVANCE TICKET purchase.

Our vocalist – Gina Allan
Two superb guitar players – Jerry Schneider/ Bill Dellert
On bass guitar – Dean Williams
On drums – Allan Clark
We definitely get toes tapping and heads swaying…. Our ever-increasing repertoire includes over 40 tunes from the Great American Songbook from the 1930’s-60’s with the addition of some popular Latin melodies. i.e., Quando, Quando, Meditation, Mac the Knife, Fly Me to The Moon, to name a few.

Well known and popular Sunshine Coast musicians, Reg and Lynne Dickson have been performing together since they met … many years ago. They truly love playing for and entertaining folks with their unique blend of folk, country, pop, jazz and original tunes. They are known for their close harmonies and big hearts and their performances are laced with an infectious sense of humour.

Over the years Reg and Lynne have produced two albums, written many songs, children’s musicals, conducted choirs, led groups of guitar players, sang with The Creek Big Band as well as Definitely Diva. Their music has been published by Cypress Choral and they were awarded Citizen of the Year twice on the Sunshine Coast for their community work.

They will have you laughing, singing along and swaying to familiar songs that we all love

The Copper Canyon Band takes our audiences through the 60’s & 70’s, recreating their favourite songs in Old Country and Early Rock’N’Roll music. In a lively show, we are proud to bring you timeless wonders from artists like, Patsy Cline, Hank Williams, Roy Orbison, The Mavericks, The Beach Boys, The Everly Brothers, Dwight Yoakam, The Beatles and a very special tribute to the King of Rock’N’Roll himself Elvis Presley!
Music to suit everyone’s taste, that will have our guests either tapping their feet, or dancing from the very first song to the last one!

Terry Boyle is a much travelled singer/songwriter from Dublin, Ireland, now living in Ladysmith. With a vast repertoire of Celtic songs, some teary, some cheery, some sing-along and some from the archives, Terry has a song or story for almost every occasion. As a songwriter Terry’s style is varied, evolving and always entertaining. Using a variety of tunings and finger-pickings, his songs are both autobiographical and descriptive of both past and present. Terry looks forward to chatting and singing to you, with you and, maybe about you or somebody you know. Following “Terry Boyle,” his first CD of original songs, Terry released a 7 song CD, “Life’s Too Short” in November 2018. Ceilidh Briscoe, from Victoria, BC, is a five time North American Fiddle Champion, an All-Ireland Fiddle Champion, and studied for six years with the fabulous 5 time All-Ireland Champion, Brian Conway. Ceilidh is proud to have performed in Ireland, the UK, Scandinavia, Germany, China, and across North America with the world renowned “Riverdance.” Together, Terry and Ceilidh present a dynamic range of songs and tunes in the style of an intimate kitchen concert. Usually exhilarating and free-flowing, sometimes mellow and thoughtful, but always hugely entertaining and engaging, this exciting duo is not to be missed.